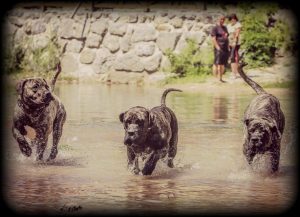 The Presa Canario, fully known as Pero de Presa Canario, is a relatively rare breed of Molosser dog originating in Spain, more specifically the Canary Islands. The name of the breed is often shortened to Presa Canario, Canary Dog or Spanish Mastiff.

The beginning of the breed as we know it today begins in the 15th century, when the Spanish conquistadors, while conquering the Canary Islands, brought with them mastiff-type molosser dogs. Later crossbreeding between the “Major”, a pre-Hispanic herding dog originating from the island, and molosser dogs brought to the islands, created the Presa Canario breed.

In the 16th and 17th century their primary task was to guard livestock, hunt wild boars  and protect the farm from attacks of wild dogs and other predators. With the arrival of the English colonists on the islands, in the late 17th century, they began to use the breed for dog fighting in domestic seaports. This practice lasted until 1940, when dog fighting is banned in Spain. With the decision to ban dog fighting, the government almost completely eradicates the breed.

In the year 1970, the breed began to recover gradually, and in 1982 a group of dog breeders from the island of Tenerife founded the “Club Espańol del Presa Canario” (Spanish Club Pero de Presa Canario). Four years later they organized the first regional dog show of the breed Presa Canario, where over 150 breed representatives were exhibited.

F.C.I. provisionally recognizes the breed in the year 2001 under the name Dogo Canario, and the breed retains such status until 2011 when it receives full recognition in the F.C.I.

In December 2018, at the request of the Spanish Kennel Club, the old breed name Presa Canario is given back and the breed once again has its original historical name.